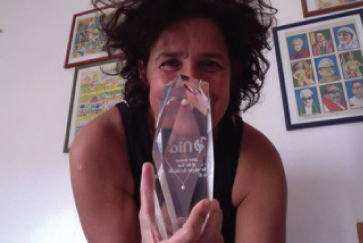 Who is Letizia Accinelli?

I was born in Bologna, where I  graduated in Foreign Languages. I then moved to Scotland for Postgraduate Studies on Scottish Women’s Literature, for which I   received  a Master of  Letters (M.Litt). Subsequently I moved to Germany, where I taught Italian in a bilingual school. I lived in Hamburg till 2005 and moved back to Italy. I have been living in Italy since then. Traveling, languages, teaching, sports and movement in general are my great passions. I have always practised movement since I was very young. Movement and nature were key values in my family. I particularly loved all kinds of water sport and swimming has always  been my passion. It gave me a sense of freedom, of oneness. I felt I was one with the water. I could feel my whole body: it made me happy, light, strong, powerful and kept me curious about my potential. I felt I was born to be in the water and water was an essential element in my life! 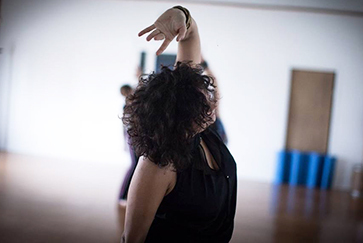 in 1999, some friends encouraged me to go and experience a Nia class in Kaifu Lodge, a big fitness centre in Hamburg . The teacher moved in a way that, even though it was new to me, was very familiar. The movements were perfectly matched to the music and this created a magic to which my body felt immediately attracted. After class, I spoke to the teacher and I found out that she was an Olympic Swimming gold medal champion.  It made sense to me! What was familiar  about her way of moving, was the quality I knew and loved in swimming and the fluidity she was embodying and communicating was the same  swimming was giving me. Only when I was moving in the water,  had I the sensation of really being into my whole body and my first Nia class gave me exactly that wonderful sensation. The first class touched me deeply. It also created space to sense and play with my emotions and to move my body, expressing what I was feeling. At the time, my life was demanding and my body was  numb.  Emotionally, I was stuck in a negative state of being. I had freshly divorced from my husband and was a single mother with two very young children and a full time job. Furthermore, I had had two knee surgeries and could not go back to some of the sports I loved- skating, finswimming. I was already doing lots of personal growth work on myself, guided by a Lakota spiritual teacher. The work I was doing on myself was deep and profound and it was healing my soul and my emotions but my body was still suffering and felt numb. I was living inside a bodiless bubble. What Nia gave me during the first class and always gives me every day,  is the connection to the joy of movement, a joy I can always tap into, no matter how I feel. A year after my first class I took my White Belt with Carlos Rosas and my Nia path started. 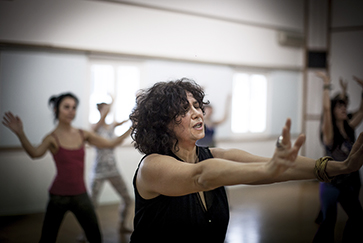 In 2000 I have received my White Belt from Carlos Rosas, one of the two cofounders of Nia and soon after,  I started subbing in the same fitness centre where I had started. Teaching something through my body was such a completely different and nurturing experience, that I decided to continue the path and travel to the States to experience Nia in its “home” and follow Debbie and Carlos Rosas trainings. I received my Blue, Brown and Black  Belt in Portland, Oregon in 2003, 2005 and 2007.

In 2010 I had been invited to a Trainers’ Training and I took the invitation up with the intention of deepening my  practice even further, making it part of my livelihood and creating a Nia community in Italy. After two years of training, many trips to the States, and many  coachings and a work placement with  great trainers, I was certified as a Trainer for the Nia Faculty.

I started training in 2012 in Italy - Rimini, Sardinia, Milan, Slovenia, as well as  co- training in Scotland with friend and colleague Britta Van Tagen and in London with friend and colleague Dorit Noble. Nia in Italy is now slowly but steadily growing and it is pleasure for me to travel around the country to reach new communities or visit teachers and support their work.

In 2014 I was nominated Nia Trainer of the year, an honour I received with gratefulness and humility.

In 2019 I was nominated Nia Trainer of the Year for a second time.